Harvesting Rhubarb
When and How To
Harvest (Pick) Rhubarb Stalks

Harvesting, or picking rhubarb is a very simple process.

Rhubarb is harvested by hand, and ONLY the stalks are edible.

Here are Helpful Tips for Harvesting Rhubarb from your Garden: 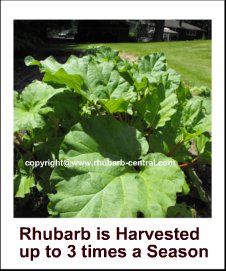 In Canada and the United States, the rhubarb season runs from about April to September, although it can also be grown forced.

Rhubarb stalks are approximately 10 - 15 inches long when ready to harvest. The length and the thickness of the stalks varies according to weather conditions and the variety of the rhubarb.

Rhubarb stalks should not be picked during the first year of planting. It is best not to pick these stalks to allow the leaves to nourish the roots for the next year's growth.

However, if the plant is growing very vigorously the first year, it is okay to pick it "lightly", but wait until the second, (and subsequent years), to harvest the entire plant. 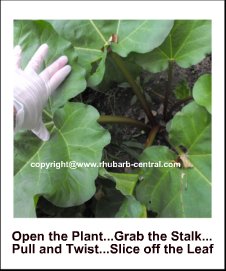 In Northern U.S. and Canada rhubarb can be harvested about every 4 to 5 weeks, or about 3 times a season. Lack of water, intense heat, and frost are the parts of the season which end, or at least will affect the harvest.

Rhubarb plant Stalks should be firm, when harvested. If they are harvested too late, they become tough.


Stalks should be free of insect damage and disease.

If the leaves are spotted, or have hole in them, or the edges are "eaten" by insects or slugs, that will not affect the stalks, and, since the leaves are discarded, you can use these stalks without any concerns.

When harvesting rhubarb, almost all of the rhubarb stalks may be harvested at one time, or you can harvest selectively over the growing season period.

It is recommended to leave about one-third of the developed stalks when harvesting the entire plant. However, when you make the last rhubarb harvest of the season, remove all of the leaves, to avoid rotting leaves affecting the crown. 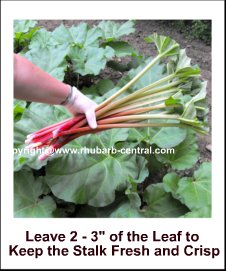 Rhubarb is not cut out, but rather pulled out. "Open" up the rhubarb plant and wedge your index finger way down inside the stalk, encircle it with your hand, and pull slowly but firmly while twisting the stalk at the "base", (also referred to as the "crown" or the "rhizome").

Cut off most of the leaf, leaving about 2 - 3 inches, (this is called a "crowfoot"). Leaving a little bit of the leaf will help to keep moisture in the stalk, so it will stay fresh and crisp longer. This is especially important if you plan to store the rhubarb in your fridge for several days.

If you are planning on freezing or canning your rhubarb, you can chop off the entire leaf of each stalk. The easiest way to chop off the leaves is with a sharp knife striking the leaf diagonally with a quick flick of the wrist.


Do you, or can you, eat rhubarb RAW?


Personally, I don't like it, however, it appears that many people do!

GO to Can you Eat Rhubarb Raw?


The leaves of rhubarb are poisonous, so it is important that, when harvesting rhubarb, you discard the leaves appropriately. Or, better still, make homemade, natural organic pesticide using the leaves! Talk about frugal gardening!

GO to Organic Pesticide and Herbicide Recipes to Make at Home

When harvesting rhubarb for market or commercial use, it is advisable to wear gloves when handling the stalks. This is due to the fact that the oil from your fingers may make purple bruise-like marks on the stalks wherever it is touched. But ... this is not a concern for the home gardener! 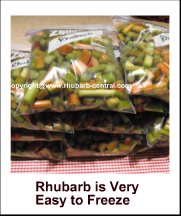 After harvesting rhubarb it can be wrapped, and kept in your refrigerator for several days, or stored by freezing or canning.

After harvesting my rhubarb, I like to use as much fresh rhubarb as I need for baking or cooking for the week. I like to freeze the rest of the rhubarb ... because it's so very easy!

Freezing rhubarb is a very simple process. I always have a lot of rhubarb in the freezer for making all sorts of delicious baked and cooked recipes all winter long. 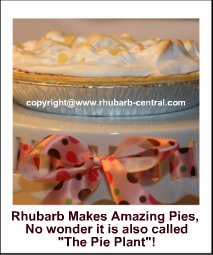 If your rhubarb plants have been hit by freezing temperatures they can still be harvested as long as the stalks are still upright and firm. The leaves may show some frost damage, but since they are discarded, this is not a worry.

If the plants have been affected by freezing temperatures and the stems appear to be mushy and soft, do not eat them. Severe cold injury may cause the oxalic acid crystals in the leaves to migrate to the stalks increasing the concern of poisoning by consumption of the stalks. If in doubt about the safety of eating stalks which have been hit by frost, do not eat them. 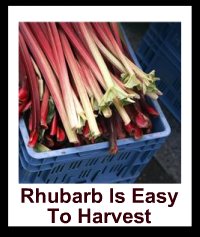 Fresh or preserved rhubarb makes the most delectable rhubarb pies, tarts, cookies, cakes, breads, muffins, desserts and so much more ... it really is the most versatile food to grow!

It can even be baked or stewed, and also makes amazing dinner or supper menus! Use rhubarb with pork, beef chicken, fish or lamb to make scrumptious dinner meals too!

Use the navigation bars of this website for links to over 250 amazing recipes to make with your harvested rhubarb!

It is fun combining rhubarb with different fruits, combining the tart goodness of rhubarb with the sweetness of other fruits! A very common combination is rhubarb and strawberries.


Below (or use the navigation bars at the left hand column) are links to additional pages with helpful information about growing rhubarb in the home garden.