Rhubarb Plant Diseases and What to Do

Rhubarb diseases are not very common due to the fact that rhubarb is a hardy, resistant garden plant.

There are a very few rhubarb diseases, mostly fungi (see pictures below), which may affect rhubarb.

Most of these fungi can be avoided by planting rhubarb in well drained soil.

If your soil is poorly draining soil you can mix it with organic matter and sand. 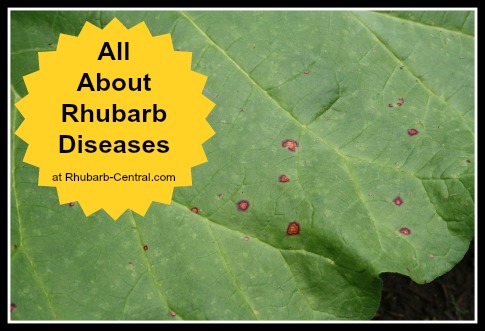 Wondering what the red spots are on the rhubarb leaves, is this a rhubarb disease?

Red Spots on the leaves of the rhubarb plants is something that I do find from time to time (see image above).

Most often this has not affected the actual rhubarb stalks at all. I pick/harvest the rhubarb stalks and discard the leaves immediately so as not to allow the fungi (see explanation below) to spread.

In most cases, unless the stalks are affected, there is NO need to discard the plants.

Here are examples of diseases and problems that may affect rhubarb plants:

Ramularia rhei and Ascochyta rhei are two different pathogenic fungi that cause leaf spots in Rhubarb plants. In fact, rhubarb is the main host plant for these two fungi.

Ascochyta leaf spot - leaf infection first appears as small, green-yellow, irregular spots less than one half inch in diameter on the upper leaf surface. The leaf develops a mosaic appearance as the lesions unite. Later, the spots develop white centers surrounded by reddish margins, bordered by a grey-green zone. In a few days, the infected spots turn brown, die, and fall out, producing a "shot-hole" appearance. Aschochyta does not cause stalk infections.

Ramularia leaf spot - leaf infection first appears as small red dots that gradually enlarge to form circular lesions a half-inch or more in diameter. Larger spots become white to tan with purplish halos. The larger spots turn tan in color and become sunken lesions in the stalk tissue. Stalk infections occur later, appearing as small spots that elongate as the stalk grows. White fungus develops in the centers of spots on both leaves and stalks, becoming brown as the tissue dies. Stalk infection is a key symptom of ramularia infection. 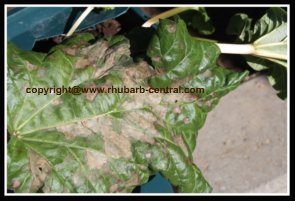 To prevent and control these fungi always remove and destroy the rhubarb leaves which have not been harvested prior to the first heavy frost.

At any time when harvesting rhubarb, remove stalks with spotted leaves first.

Do not over-water the rhubarb, and if possible water only the soil (instead of over-head watering). Water early in the day to allow the leaves to dry by afternoon.

Also, do not put composted rhubarb leaves back on your rhubarb garden. By doing so you may be infecting the garden with fungi.

It is also possible to apply fungicides for control. Check with your local garden center for the best product to use.

This fungus may cause leaf, stalk, and crown rot, most often affecting forced rhubarb (covered rhubarb). This disease is more common in areas where rhubarb plants do not receive proper air circulation and high humidity.

To prevent this fungus, ensure there is no rotting material near the rhubarb plants, and apply a fungicide as soon as you notice the disease, and at 7 day intervals, or as recommended by a professional at your garden center.

Rhubarb plants affected by fungi and bacteria causing root and crown rots show a lack of ability to thrive. Leaves may turn yellow to red and collapse. The crowns, when examined, exhibit a brown-black decay. Large roots lack the characteristic small feeder roots. The larger roots may have large brown-black hole damage.

To help prevent this root and crown rot disease, be sure to purchase, (or otherwise acquire), healthy propagation rhubarb plant stock.

Plant rhubarb in gardens with well drained soil, and remove and destroy plants that exhibit disease, as soon as it is noticed. This will prevent the spread of the root and crown rot.

This disease problem with rhubarb may be more common after an unusually "wet" Spring, or when the plants are under another type of environmental "stress".

The early indication of this disease is wilted leaves and large water-soaked lesions on the stalks. The lesions increase in size and eventually they turn black. The stalks may also look twisted and, eventually the whole stalk may collapse.

To help control this disease it is important to practice good  garden "sanitation", by removing and disposing of infected stalks as soon as the disease is evident.  Also, be sure to harvest all of the stalks prior to the first frost of the Season, and, any stalks that are still on the plant after frost should be removed because this disease over-winters in infected plant tissue.

It is also important to ensure that the affected plants are well fertilized as soon as growth appears the following Spring, and again after the harvest is complete. Since this problem is more prevalent among plants that are stressed, fertilizing to provide optimal growing conditions should decrease injury caused by disease.

There are several viruses which are known to occur in rhubarb. If a rhubarb plant is affected by a virus it may show signs such as ring spots on the rhubarb leaves.

To help prevent rhubarb viruses, be sure to acquire healthy rhubarb plant stock, and avoid planting virus free crowns near virus contaminated crowns, so as not to allow the virus to spread to the healthy plants.


I have never, (over 30 years!), treated my rhubarb plants for any rhubarb disease.

The leaves of my rhubarb plants are often dotted with small holes (usually due to plant pests), but the leaves are discarded when the stalks are harvested.

I cannot think of an easier, and hardier vegetable to plant in your garden than rhubarb.

And it is a thrifty vegetable too!

No need to purchase seed each year, very little care required, and a HUGE harvest, a few times a season!

Vegetable gardening doesn't get much easier than that!

Every property can accommodate a rhubarb garden ... it really does grow like a weed!

Below are additional pages on this website with helpful information about growing rhubarb in the home garden, or use the website navigation bars.

HOW TO GROW Rhubarb

©2010-2020  Rhubarb-Central.com
All Rights Reserved Worldwide
No Reproduction Permitted Without the Expressed
Written Consent of the Site Owner