What a scrumptiously scrumptious finale this rhubarb dessert was to our dinner! 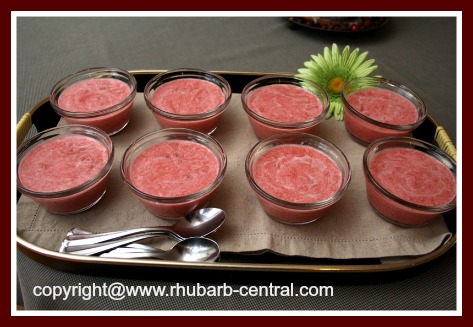 You can use fresh OR frozen rhubarb for this rhubarb cream pudding.

I made this recipe for a very easy, delicious rhubarb dessert yesterday, using freezer rhubarb, and it turned out pleasing to the eyes and the palate!

Note - If you are using freezer rhubarb for this rhubarb cream recipe, you do not need to thaw it, simply add the frozen rhubarb to the pan, but reduce the 1 cup water to 3/4 cup water.

In a pan, combine the rhubarb, 1 cup water, sugar and the lemon zest.

Cover, and bring mixture to a boil.

Reduce the heat, and allow mixture to simmer until tender. (about 15 minutes). Stir often to prevent burning and sticking.

Sprinkle the gelatin over the 1/2 cup water, stir briefly, and allow mixture to stand for 5 minutes, then stir it into the rhubarb mixture. 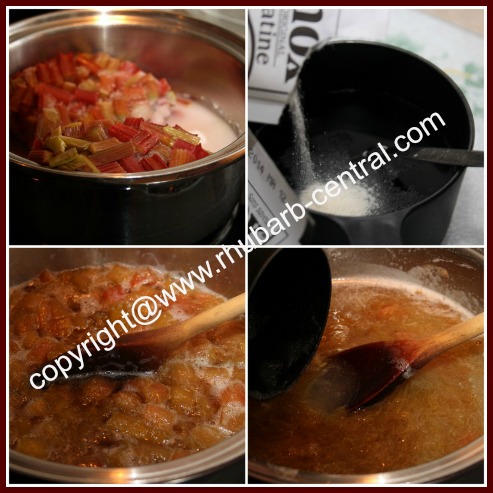 Cook the combined mixture for 5 minutes longer, stirring and mashing the rhubarb. 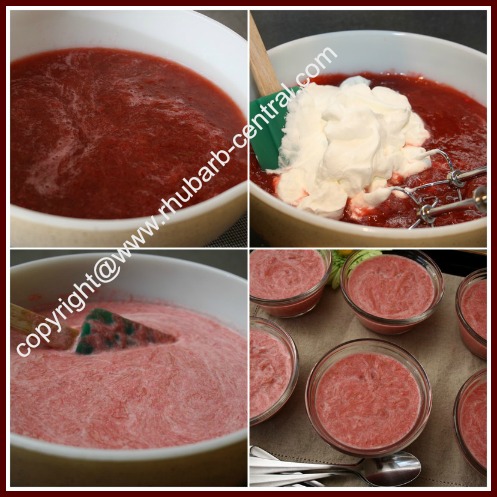 Pour the mixture into a large bowl, and refrigerate until it holds its shape softly when spooned, about 1 1/2 hours.

In a another bowl, beat the cream using an electric mixer, until stiff peaks form, and then fold it into the rhubarb till well combined.

Chill in the refrigerator for about 4 hours, or until firm.

Left-over rhubarb pudding will keep in the refrigerator for a few days ... another easy dessert in a few days! 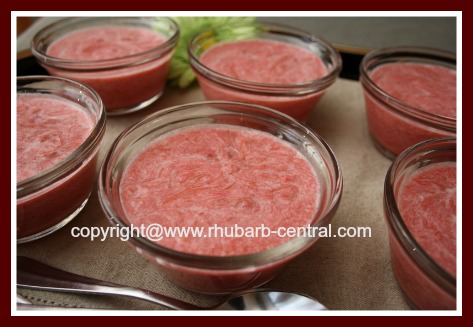 
Is the colour of your rhubarb not as pink or red as you would like?

Since my freezer rhubarb was not very red, after the rhubarb was finished cooking with the gelatin/water mixture, I added red food colouring, as Rhubarb Central explains here:

GO to How to Make Green Rhubarb into RED Rhubarb

Check it out! Some rhubarb dishes, especially desserts do look more attractive with a little redder rhubarb!